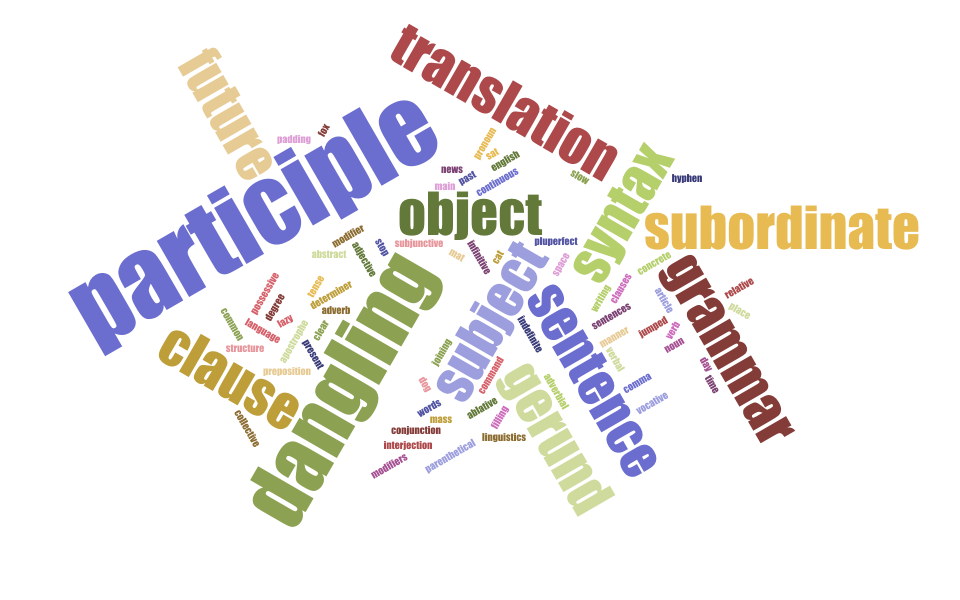 Participles - and how to stop them dangling

Some languages love nouns. And others love verbs. As any good translator knows.

French, German and Dutch are great examples of languages that delight in peppering their written documents with things rather than actions.

English, on the other hand, is a language that loves “doing words”. (And I mean ‘doing words’ as a modifier followed by a noun, not as a verb followed by an object! I love language…)

Here’s what you would very likely find written in a German document about a new company about to move into the area:

The relocation of the company will be effected on Thursday and the official opening of the new offices will take place on Monday.

In clear English, we’d much rather say:

The company is moving into its new premises on Thursday and will be opening for business on Monday.

But what if the first noun in your sentence is just calling out to be translated by a participle? This is very often the case in sentences where you don’t simply want a series of clauses or ideas linked by ‘and’.

Participles (present or past – the -ing or -ed forms of verbs) are beautiful and useful things in English. They add flow to a sentence. By introducing a sentence with a participle phrase, you can add interest and make your writing sound more idiomatic.

Having moved into its new premises on Thursday, the company will be opening for business on Monday.

But in my experience, into-English translators working from languages in which this structure is much less common often tend to overlook them completely in their translations too.

But when you use participles, you do have to follow the grammar rules. The participle in the opening phrase needs to refer to its subject in the main clause. Otherwise it completely muddles the meaning.

Here are some examples of dangling participles in English – from even the most exalted sources:

If found guilty, the lawsuit could cost the company US $5 billion.

Walking down the road singing along to 70s disco hits on my iPod, people looked at me as if I was mad.

Sleeping in mine orchard, a serpent stung me. (Hamlet)

You see what I mean? Your brain automatically wants to find a subject to go with that neat little participle at the beginning. And when it’s the wrong subject, it upsets the flow and makes you stumble.

Now, the thing is, when you’re translating away and swapping nouns for verbs, it’s easy to overlook this little grammatical quirk.

Before submission of a binding offer to the customer, it must be approved by the project manager.

So to make this sentence flow, we swap whatever nouns we can with verbs – and in this case, ‘submission of’ is crying out to be replaced with a participle: ‘submitting’.

Before submitting a binding offer to the customer, it must be approved by the project manager.

And behold: we instantly have a dangling participle. We can’t even blame it on the source text – it didn’t have one!

So in this example, we need to ‘pad’ a bit to make it read well:

Before submitting a binding offer to the customer, we need to get it approved by the project manager.

Participles and participle phrases can be extremely useful devices for getting round an excess of nouns in your translation. But don’t forget to make sure they tie in with the correct subject in the main clause that follows.